[LotRO] Moving Out of The Shire

After a month of playing LotRO, Scorbo, my Burglar Hobbit, is leaving The Shire and finally moving on to Bree. 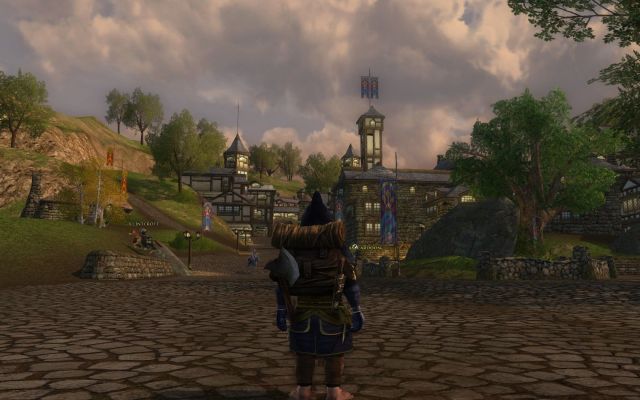 Scorbo at the West Entrance of Bree.

Honestly, I could’ve left The Shire much earlier. But since I’m only a freemium player that has a few quests packs, I had the need to do every available quest and milk all the XP that I can get out of The Shire. So, at level 17, I was still doing level 8 quests with my Burglar.

The quests –since my character level exceeded that of the quests’– didn’t yield a lot of XP. So, the progression of Scorbo was brought down at a crawl’s pace. I didn’t mind it though. Because I don’t pay a monthly subscription for this game. Unlike pay-to-play MMOs, I’m not pressured to reach level cap and the endgame content at a breakneck speed, and get my money’s worth. In LotRO, I have time to take my time.

Taking time in LotRO has been a wonderful experience. I’ve explored all –if not most– of The Shire. Its scenic beauty is mesmerizing. Besides Moonshade Highlands (RIFT), it’s one of my favorite virtual places. But spending time there also made me see its ugly side. I admit that I don’t read the stories on the quests. Heck, I don’t even do quests. But reading them in LotRO, I found out that Hobbits are evil. Not puppy-kicking kind of evil. But petty and selfish, the sort of evil that you see in everyday life.

Anyways, I’m really excited to be on Bree now. I’ve been to this place before. But that was five years ago, with my Champion. I’ve already forgotten the quests and the story of this place. So, it’s a new adventure for me. Like in The Shire, I’ll also stick around in there for sometime –doing all the quests and every deed on my deed log.